Everyone involved with Side By Side will know that Susan Wallin has been their artistic driving force since its inception.

What they may not know, is how Sue became involved in theatre, dance, drama and teaching – so here is her story.

As a child, Sue was always writing stories and poems and finding any chance to gather her friends to put on a ‘show’.

One Granny’s garden was ideal, as it went up in terraces and her Granddad had built a concrete air raid shelter into the lower garden during the war, which created an ideal stage on the flat roof. The laundry, with a window onto the yard, was a box office and a café. When Sue was about 9 years old, her other Granny paid for her to have piano lessons. Sue remembers walking a mile from her home to a house in Cradley Heath, where the piano teacher lived.

“It was very dark, walking up an entry into a room with a piano that I thought of as a set of old decaying teeth, the ivories were so worn. Obviously I wasn’t inspired, my mother tried to get me to practice, but it was hard work”. 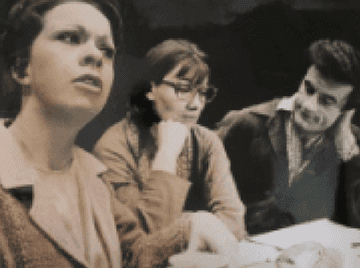 Sue went to Queen’s College in Stourbridge, and at the same time began going to Audree Biggs (now Henwood) for elocution lessons. Audree asked if Sue would like to watch a dance class, which she ran at the Conservative Club.

Sue said: “from then on I was in love with dancing – Audree was like a big sister and influenced my life. She put on shows at the Whitley Memorial Hall, next to her Studio. I remember standing in line with all the other children to have my make-up put on. The smell of the grease paint really does evoke fond and exciting memories”.

Sue played parts including Fairy Midnight, A Starfish, Wendy in Peter Pan, Cecily in The Importance Of Being Ernest as well as performing some lovely Classical Ballet pieces. Every year Sue took examinations with LAMDA and the BBO.

When Sue was 16, Audree asked her to join North Worcestershire Operatic Society, which met in Stourbridge. Audree was their choreographer and they were getting ready to perform ‘The Pyjama Game’. Audree encouraged her to audition for a part.

Sue remembers being terrified. “I tried to sing and my throat just closed up - nevertheless, I did get the part of Mae, who didn’t have to sing! Ken Allen eventually took over as producer. He was also producing Quarry Bank Operatic Society, so one or two of us followed him there. I had a second hand Ford, which I painted blue. It had no heating system and sometimes the gears stuck and made it jerk like a rodeo horse, but my Cradley Heath friends were still quite happy to crowd into it for a lift to rehearsals”.

Adding choreography and LAMDA to Sue's set of skills

Sue continued to study dance and drama with Audree and became the Choreographer for Quarry Bank Operatic Society and eventually for both North Worcestershire and Brierley Hill Operatic Societies. During that time she and her friend Pat Perry (who made their dance costumes) were invited by Harry Millward to perform in concerts with tenor, Bert Bowen and comedians Dolly Allen and Tommy Mundon. The concerts went on late into the night, so Sue and Pat could still be waiting to go on at 11.00pm.

Sue’s daytime job was working in the family shoe shop business. She said: “I had my own shop in Halesowen where I sold accessories as well as shoes. After taking a window dressing course, I was far more interested in that side of the business than the book keeping. It was in my late thirties before I decided to take a different direction.

I took my final LAMDA exams and gained an LLAM and ALAM,which gave me the qualifications to teach. I helped Audree with groups at the Henwood School of Dance and Drama. Later I began teaching at Stourbridge College. I studied for my BA Hons at the same time and then for my Cert Ed”.

Sue did a lot of research on the history of theatre in the Dudley area. She has lots of tape recordings of people who were involved in amateur theatre from the 1920s to 40s, and used to write articles for the Black Country Magazine, mostly about theatre history. Sometime in the 1980s, Margery Mills wanted to retire from her School of Speech and Drama. Sue applied and took over from her and ran the classes at the Norton Community Centre. As well as entering students for examinations with the English Speaking Board and LAMDA, they put on productions at the Y.M.C.A in Stourbridge, had a float in Stourbridge Carnival and performed an outdoor MELODRAMA in the fields around Norton.

Amateur theatre continued to be Sue’s passion and motivation and she toured around the locality performing concerts with friends. In 1997, the Government set up the ‘Arts 4 All initiative’, which meant that performing Arts groups could apply for funding. Sue said: “Our concert group applied, we were now ‘Time’s Delights’ and we were successful in getting funding. We purchased a set of stage lights and costumes for us all." 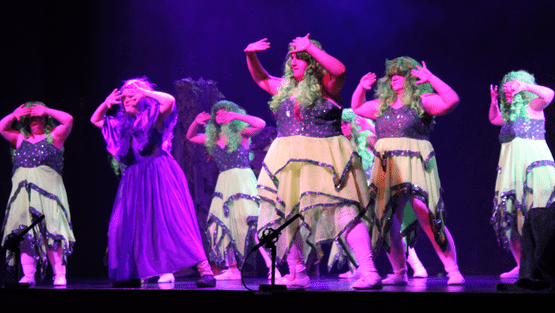 A choreographed dance scene from ROBIN HOOD AND THE TIMESTONE: 2019 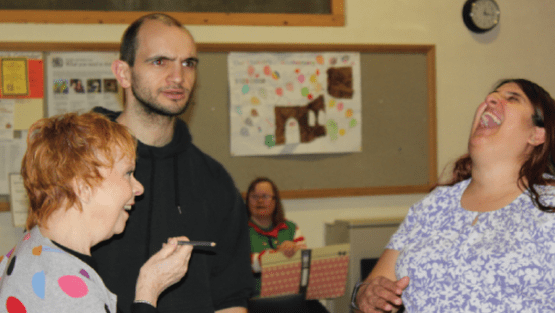 Having fun during a SbS rehearsal!

In 1997, Sue and Lynn Whiley, the head of her department at Stourbridge College, applied for Arts 4 All funding for the College actors and they were able to buy loads of coloured t-shirts to use as basic costumes - which they still use. Another fortunate thing that happened (fortunate for SbS that is) was that the Fashion Students at the College were unable to use the Town Hall for their show, so the Vice Principal asked Sue if she could use it for a performance.

During the 1990s, the College was putting on courses for learning disabled people who went to the Social Education Centres. These included: Cookery, Craft and Numeracy. The head of the department asked Sue if she thought she could teach them Drama and suggested Sue go into the Arts Class to meet them.

Sue explained: “There was never any doubt that I would be able explore the possibilities this presented. Because all courses needed to be accredited, I decided that the LAMDA Mime examinations would probably be the best opportunity for the students to progress. So the skills I taught the students in those early years were focused on self expression through mime and bodylanguage and telling stories with music and sign language”.

" ... the skills I taught the students in those early years were focused on self expression through mime and bodylanguage and telling stories with music and sign language ... "

" That was the beginning of Side by Side and it sort of took over my life. "

Sue sometimes asks herself “Why did I eventually take on more teaching with learning disabled people and less with F.E students? Because those with LD were eager to learn, wanting to be challenged, ready to take on new ideas and highly motivated to contribute to creating something they could share and be appreciated for. I had no desire to move up the College ladder of ‘progress’, because it meant more administration and a dwindling time to teach. I loved teaching and teaching people who were so enthusiastic to learn, was the reward. It’s their positivity and their joy in achieving that caught Derek in their benign web as well. When they have such delight in being involved in and creating theatre, it infects you and you want to keep giving them more”.

In 2013 Sue received the MBE for ‘services to people with learning difficulty’ from Her Majesty the Queen. 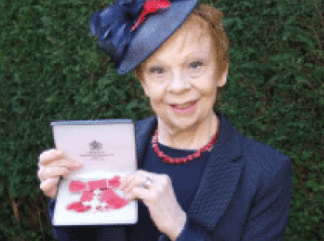